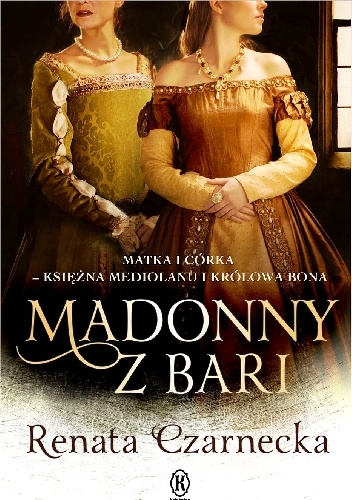 ‘I’m scared to fall asleep. I’m afraid to close my eyes even for a moment’, said Isabela with concern in her voice. It was a deep night. Not the first one since there had been news about slaughter committed in Capua. Candle lights waved with the princess’s breaths. Isabela moved. Her slim shade slided on silk curtains and wallpaper as if on the ice sheet. She was followed by the eyes of three queens: Isabela, Beatrice and Joana. Women’s silhouettes tucked in black dresses melted into the room’s dusk. Only bright faces and white hands were pushing forward in the darkness. ‘Caesar Borgia murdered many men. He didn’t have mercy to defenders. Neapolitan noble women were taken captive. Many of them given to his soldiers. The worst rogues tolled the bones for them during the day to disgrace under cover of the night. Capua was soiled with innocent blood and tears of distraught mothers trying to find their babies. Every day, in haste and heat they bury the massacred bodies. All for nothing. There is a deathly odour over Campania.’ Queen Joana shuddered hearing these words. ‘Frederick fortifies the town. He troops the army, stores food supplies’, she said as if she couldn’t accept the prospect of cruelty pictured by the Duchess of Milan. ‘How long can we resist the French?’, the Queen of Hungary broke in with harsh voice. ‘A week? Two weeks? And then what? We’ll starve or rats will eat us alive.’ There was dead silence. ‘The king will not give Naples to the French without a fight.’, Muttered the Queen of Naples with a commanding voice coming across an acute sight of Beatrice of Aragon. Isabela del Balzo’s eyes were oozing with tenacity as if she didn’t accept the thought that her husband could have dishonoured himself and surrender the town to the King of France. The curtain by the door moved. They stood in silence scared to be eavesdropped. Signora Pignatelli, who served her lady that night, stood up from the stool and started towards the door. She raised the curtain and carefully opened the door. The corridor yawned empty and silent – no rustle or step. She returned to the chamber stating that the door was half closed and the draught waved the curtain.
After an hour of talks and debates what the following days may bring, Isabela del Balzo said: ‘Go back to your rooms, it’s late.’ The Duchess of Milan saw the Queen’s grief-stricken and exhausted face and wanting to reassure her she waited until Joanna and Beatrice moved away and said: ‘ I welcome your faith and admire your courage, You are the pillar of your husband.’ Isabela del Balzo looked at her with shining eyes and answered with strong, firm voice:  ‘The King of Spain is the foundation my faith is based upon. I will believe in victory until I get the news that he does not care about us.’ The Duchess of Milan’s eyes wandered so that her aunt couldn’t read her mind. She didn’t
share her deep faith in Ferdinand the Catholic’s dedication. She believed that his prolonging silence does not herald anything good. Having left the chamber the Empress slowly covered the distance of a few steps that separated her from the rooms she lived in. She came in. A small foyer ran to her bedchamber. She looked as us ual to her daughters’ room. She raised the curtain and looked at her children’s sleeping faces. She listened into silence and heard their calm, regular breathing. A smudge of light came into the room and cut Bona’s bed into two. Isabela saw her asleep face and arms tenderly embracing her beloved doll from Lucrezia Borgia. She smiled at that view when suddenly she heard someone’s muffled crying. It stopped so fast that she had no idea where it came from. Or maybe she just misheard? Maybe it was just her daughters’ breathing that sounded like crying? She looked at Hyppolyta’s bed. The girl was all covered with quilt. Isabela had the impression that the quilt moved. She approached the bed, slipped off the bedding and asked with punishing voice: ‘Why aren’t you sleeping?’ Only then she noticed the girl was in tears.‘ Are you hurt?’, Isabela asked sitting on the bed’s edge. Hyppolyta shook her head. ‘So why have you been crying?’ ‘I’m scared, mummy’, she answered quietly with squeaky voice.
Isabela noticed fear in her eyes. ‘ What are you scared of?’ ‘The French and…’, she stopped as if she was afraid to finish. ‘Who else?’ ‘ Rats. I’m scared of them the most.’ ‘Why?’, Isabela did not understand this unexpected
fear. ‘Because they eat people’, said Hyppolyta. The Duchess kept quiet for a while wondering what made Hyppolyta have such thought deep at night. ‘Who told you so?’, she asked. ‘ I’ll whisper it in your ear but don’t tell anybody, mummy’, she said with fear. The Duchess bended over her daughter and heard her whisper:
‘It was Bona.’ Isabela kept her head back. The stood straight and looked carefully at her younger daughter. Is she sleeping? Or maybe she’s pretending? – she was wondering. What if she was eavesdropping the conversations in Queen Isabela’s room? Why did she come there? And why Simonetta didn’t make sure the Princess stayed
in her room? She went to bed first without waiting until the girls will fall asleep. Therefore, am I allowed to be angry with my own children? They are vulnerable, terrified of what is around them. Heaven forbid, they fear me. I must be a thoughtful and gentle mother. I shouldn’t show them hostility or my own fears. Oh, Simonetta! – she sighed heavily. – Maybe she’s not the right person to take care of them? The Duchess turned her head. She saw Hyppolyta staring at her. She kissed her forehead and she said smiling: ‘Sleep! And don’t be afraid of rats. There aren’t any.’
Close Menu